What is Two factor authentication (2FA)? 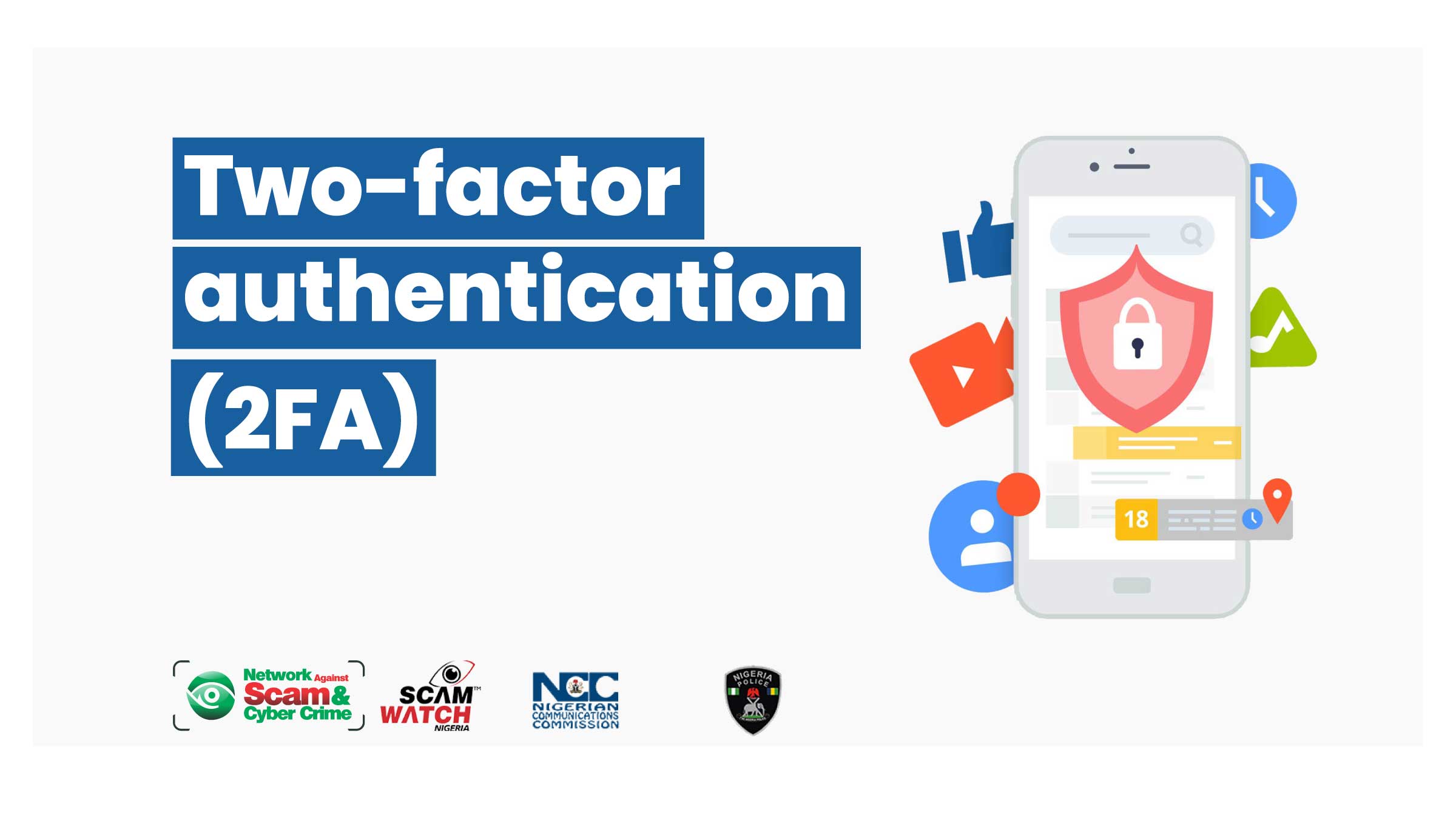 What is Two factor authentication (2FA)?

What are authentication factors?

Authentication factors, listed in approximate order of adoption for computing, include:

A knowledge factor is something the user knows, such as a password, a PIN or some other type of shared secret.

A possession factor is something the user has, such as an ID card, a security token,push notifications  a smartphone or other mobile device.

An inherence factor, more commonly called a biometric factor, is something inherent in the user's physical self. These may be personal attributes mapped from physical characteristics, such as fingerprints authenticated through a fingerprint reader; other commonly-used inherence factors include facial and voice recognition. It also includes behavioral biometrics, such as keystroke dynamics, gait or speech patterns.

A time factor restricts user authentication to a specific time window in which logging on is permitted, and restricting access to the system outside of that window.

What is two-factor authentication?

As far as single factor authentication services go, user ID and password are not the most secure. One problem with password-based authentication is it requires knowledge and diligence to create and remember strong passwords. Passwords require protection from many inside threats, like carelessly stored sticky notes with login credentials, old hard drives and social-engineering exploits. Passwords are also prey to external threats, such as hackers using brute-force, dictionary or rainbow table attacks.

Given enough time and resources, an attacker can usually breach password-based security systems. Passwords have remained the most common form of single factor authentication because of their low cost, ease of implementation and familiarity. Multiple challenge-response questions can provide more security, depending on how they are implemented, and stand-alone biometric verification methods can also provide a more secure method of single-factor authentication.

There are many different devices and services for implementing 2FA -- from tokens, to RFID cards, to smartphone apps.

Two-factor authentication products can be divided into two categories: tokens that are given to users to use when logging in, and infrastructure or software that recognizes and authenticates access for users who are using their tokens correctly.

Organizations need to deploy a system to accept, process and allow -- or deny -- access to users authenticating with their tokens. This may be deployed in the form of server software, a dedicated hardware server or provided as a service by a third-party vendor.

An important aspect of 2FA is ascertaining that the authenticated user is given access to all resources the user is approved for -- and only those resources. As a result, one key function of 2FA is linking the authentication system with an organization's authentication data. Microsoft provides some of the infrastructure necessary for organizations to support 2FA in Windows 10 through Windows Hello, which can operate with Microsoft accounts, as well as authenticating users through Microsoft Active Directory (AD), Azure AD or with FIDO 2.0.

Hardware tokens for 2FA are available supporting different approaches to authentication. One popular hardware token is the YubiKey, a small USB device that supports one-time passwords (OTP), public key encryption and authentication and the Universal 2nd Factor protocol developed by the FIDO Alliance. YubiKey tokens are sold by Yubico, Inc., based in Palo Alto, Calif.

When a user with a YubiKey logs into an online service that supports OTP, such as Gmail, GitHub or WordPress, they insert their YubiKey into the USB port of their device, enter their password, click in the YubiKey field and touch the YubiKey button. The YubiKey generates an OTP and enters it in the field.

The OTP is a 44-character, single-use password; the first 12 characters are a unique ID that identifies the security key registered with the account. The remaining 32 characters contain information that is encrypted using a key known only to the device and Yubico's servers, established during the initial account registration.

The OTP is sent from the online service to Yubico for authentication checking. Once the OTP is validated, the Yubico authentication server sends back a message confirming this is the right token for this user. The 2FA is complete. The user has provided two factors of authentication: Their password is the knowledge factor, and their YubiKey is the possession factor.

Smartphones offer a variety of possibilities for 2FA, allowing companies to use what works best for them. Some devices are capable of recognizing fingerprints; a built-in camera can be used for facial recognition or iris scanning and the microphone can be used for voice recognition. Smartphones equipped with GPS can verify location as an additional factor. Voice or Short Message Service (SMS) may also be used as a channel for out-of-band authentication.

Apple iOS, Google Android, Windows 10 and BlackBerry OS 10 all have apps that support 2FA, allowing the phone itself to serve as the physical device to satisfy the possession factor. Duo Security, based in Ann Arbor, Mich., and purchased by Cisco in 2018 for $2.35 billion, is a 2FA platform vendor whose product enables customers to use their trusted devices for 2FA. Duo's platform first establishes that a user is trusted before verifying that their mobile device can also be trusted for authenticating the user.

Authenticator apps replace the need to obtain a verification code via text, voice call or email. For example, to access a website or web-based service that supports Google Authenticator, the user types in their username and password -- a knowledge factor. The user is then prompted to enter a six-digit number. Instead of having to wait a few seconds to receive a text message, Authenticator generates the number for them. These numbers change every 30 seconds and are different for every login. By entering the correct number, the user completes the user-verification process and proves possession of the correct device -- an ownership factor.

The account-recovery process itself can also be subverted when it is used to defeat two-factor authentication, because it often resets a user's current password and emails a temporary password to allow the user to log in again, bypassing the 2FA process. The business Gmail accounts of the chief executive of Cloudflare were hacked in this way.

Although SMS-based 2FA is inexpensive, easy to implement and considered user-friendly, it is vulnerable to numerous attacks. NIST has deprecated use of SMS in 2FA services in its Special Publication 800-63-3: Digital Identity Guidelines. NIST concluded that one-time passwords sent via SMS are too vulnerable due to mobile phone number portability, attacks like the Signaling System 7 hack against the mobile phone network and malware like Eurograbber that can be used to intercept or redirect text messages.

Most attacks originate from remote internet connections, so 2FA makes these attacks less threatening. Obtaining passwords is not sufficient for access, and it is unlikely an attacker would also be able to obtain the second authentication factor associated with a user account.

However, attackers sometimes break an authentication factor in the physical world. For example, a persistent search of the target premises might yield an employee ID and password in the trash, or in carelessly discarded storage devices containing password databases. However, if additional factors are required for authentication, the attacker would face at least one more obstacle. Because the factors are independent, compromise of one should not lead to the compromise of others.

This is why some high-security environments require a more demanding form of multifactor authentication, such three-factor authentication, which typically involves possession of a physical token and a password used in conjunction with biometric data, such as fingerprint scans or voiceprints. Factors such as geolocation, type of device and time of day are also being used to help determine whether a user should be authenticated or blocked. Additionally, behavioral biometric identifiers, like a user's keystroke length, typing speed and mouse movements, can also be discreetly monitored in real time to provide continuous authentication, instead of a single one-off authentication check during login.