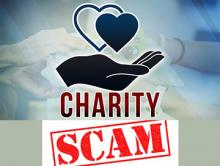 Scammers take advantage of the generosity and open heart of philantropic people to make them victims of fake charity scams.

They usually impersonate genuine charity organizations with fake documents, websites or social media pages and seek for donations or contact you claiming to collect money after natural disasters, wars or major events.

How this scam works

Fake charities attempt to take advantage of your generosity and compassion for others in need. Scammers will steal your money by posing as a genuine charity. Not only do these scams cost you money, they also divert much needed donations away from legitimate charities and causes.

Fake charity approaches occur all year round and often take the form of a response to real disasters or emergencies, such as floods, cyclones, earthquakes and bushfires.

Scammers will pose as either agents of legitimate well-known charities or create their own charity name. This can include charities that conduct medical research or support disease sufferers and their families. They may also pose as individuals needing donations for health or other reasons.

Scammers may also play on your emotions by claiming to help children who are ill.

Fake charities operate in a number of different ways. You may be approached on the street or at your front door by people collecting money. Scammers may also set up fake websites which look similar to those operated by real charities. Some scammers will call or email you requesting a donation.

Medical help scams are very prevalent in our society due to the lack of adequate medicare; the scammers play on your emotions by claiming money to help poor children who are ill. They clone the websites of real charities and ask for money claiming that some poor children are in need of  their help to get an open heart surgery or kidney transplant that costs a large amounts of money.

People have been scammed using this scheme concerned with seeking help for the families of fallen officers and men. Many genuine charities are supporting such families and people are very active in lending their helping hand to them but scammers have not left this area too. The con artists divert your donations with no concern or regard, leaving the families stranded.

Have you been scammed?

If you think you have provided your account details to a scammer, contact your bank or financial institution immediately.

We encourage you to report scams to us via the report a scam page. This helps us to warn people about current scams, monitor trends and disrupt scams where possible. Please include details of the scam contact you received, for example, email or screenshot.

We also provide guidance on protecting yourself from scams and where to get help.

Spread the word to your friends and family to protect them.